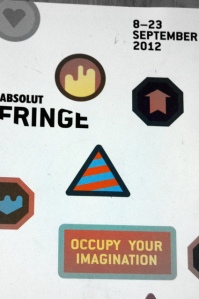 Last night I went to see ‘Oh the Fuck Moment’ which was performed upstairs at Film Base offices in Curve Street, Temple Bar. Our group was made up of about 20 people and just by chance it included a number of well-known theatre practitioner. This show was a Fringe First winner in Edinburgh Fringe last year.

We are meet by Chris Thorpe one of the two actors in the show at the bottom of the stairs and he escorted us to a very messy boardroom, with post its, folders and other office stationary strewn across the table and the floor. Both Chris and Hanna Jane Walker are dressed in smart business type suits. Hanna Jane hands everyone a cup of tea and Chris escorts everyone to the sit at a boardroom like table. He tells everyone not to worry where they sit there is the same risk attached regardless of where you sit; at this point 2 of our group decide to leave the room and the show mostly likely in fear of having to participate.

With all those remaining seated a table tennis type delivery begins of back and forth ‘The Oh Fuck Moment’s between the two performers sitting on opposite sides of the table. The kind of of things we have all experienced – sending that late night email having drank a bottle of wine, been over heard by your boss calling him a wanker and some larger ones when you know you have endangered your life.

In front of each participant is a post it, a pencil and a marker after some more discussion Chris asks everyone to write down their own ‘The Oh The Fuck Moment’, we are then asked to look at the base of our cup which contain certain symbols, those with the symbol he selected are asked to move their cups (4) into the center of the table. They are the ones chosen to reveal their Oh The Fuck Moment when each has spoken we are asked to vote on whether there was any way back by lifting our pencil or not by raising our marker.

The moments are written down on a flip chart and the scores written beside each and some discussion revolves around the various moments. More rapid fire poetry moments between both performers including some well publicized Oh fuck events which were avoidable. We are taught at early age the difference between right and wrong but no one ever tells you that fuck ups are very much a part of life and when they happen we should not be a shamed. So rather than say we fucked up we try and conceal those moments not knowing how to react. Chris gave an account and very graphic sexual event (true event he said) involving a hockey stick which proved fatal only because the person left it too late to seek medical help probably out of shame. The whole event was made all the more real when Chris introduced a hockey stick onto the table to explain how it may have occurred at this point a woman on the other side of the table became faint from the gory detail presented. The show was in a state of suspended animation while windows were opened and a glass of water produced. The lady recovered and the show continued with more rapid fire interaction and another round of check the bottom of your cups.

The show was like a team building exercise (without the name tags and personal introductions), I liked both performers and there were moments in there that liked but overall it will not rank as one of my highlights of the Fringe.

Like Loading...
‹ “Mass” at Absolut Fringe – seeking out a modern day replacement
‘Souvenir’ written and performed by Bush Moukarzel is clever and engaging. ›